If you’ve been following this sporadic blog at all you know I’ve not really put any priority on meditation any longer. I don’t meditate. I don’t focus on the empty state of the mind when I stop doing, stop thinking. Still, it can be called on in a second, and it’s there. Instead I fill my time with doing. I feel like I’m under a time limit to complete some amazing things. I’ve never felt like there was any deadline until I hit 40 something. Then it became all too real. I think it was my friend from my Air Force days, Brent Hill, dying at around 43 years of age. That was a wake-up call. It happens anytime.

So, instead of sit here in bliss, I pack as much as I can into my day and don’t give myself any time to sit and experience empty mind, blank mind, the flat-line state that is underneath my ‘doing’.

I felt anger well up inside over something. Usually I just feel it and really pursue it – letting it play out fully. Today I did something I don’t usually do, and something that I haven’t done regularly for years. I watched it grow and I realized it was just an empty emotion. I watched it well-up, noted it, and it disappeared. I smiled just to make sure. Yep, it was completely gone.

Does enlightenment offer mastery over all our emotions?

I don’t know. I don’t think I’m enlightened. I do think I get glimpses. If I’m enlightened then I haven’t really realized the importance of the state because I’m still bumbling through life “doing” as much as possible. I’m not usually stressed out, but I do get angry and stressed sometimes. It’s part of living life. I think it’s beneficial to get angry at drivers that endanger my life. It wakes me up, that’s for sure! So, anger is beneficial in that it snaps me out of my complacent driving. I wake right up when someone almost runs me off the road.

But, this technique today deserves some more practice. Maybe practice is the wrong word. It deserves more instances of it. It blew me away that, despite it being such a long time that I haven’t meditated – there it was… complete mastery over anger. Is it always there for me, anytime I want it? I don’t know. I’d guess it probably is.

The empathy I have has almost become overwhelming at times. I can tear-up in an instant. Let me think, when did it last come? Ah, I got it when I saw the son of a young woman here that recently lost her husband. He committed suicide. The woman raises the son herself now. She’s working pumping gas. He was an engineer. They made decent money. The guy left her alone with her little son – 4 years old. Same age as my daughter. It rips me up when I see her or the boy. I see them often, and still the feeling comes over me instantly and nearly overwhelms me.

Compassion, empathy, these are nothing new to me. I’ve been sensitive to other people’s struggles for a long time, and to some degree. Probably a high degree. But, after meditation it just became PROFOUND.

Anyway, just felt like typing something at the site here today after the anger turned to dust experience. Quite an amazing feeling, experience. I do hope you continue to meditate and experience something like this some time. Meditation is an exceptionally simple game. You just need perseverance. You need to play to win.

Is it worth it?

I think it’s worth it… 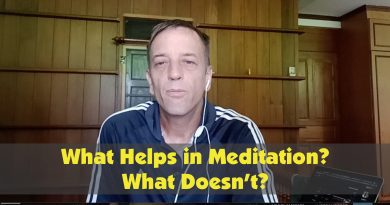 Are You On the Right Path in Meditation? (What Helps, What Doesn’t)

One thought on “Does Enlightenment (Nirvana) Give You Mastery Over Emotions?”