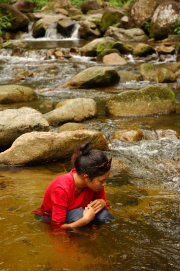 An online friend of mine whom I’ve never met came up with this word to describe a state of mind during my meditation that I was trying desperately to describe to her. It came to her in a split second and yet she insists she’s never used the word before to describe anything.

Seemlessness works for 2 reasons. It’s a play on words. When spoken it can represent two different words.

The word, seem, means that there is some distortion of reality… of perception of reality… some twisted idea or sense of objective reality. Seemless would mean that one is experiencing objective reality with any “seeming”. Without any distortion. In that way, meditation and the process that is going on inside me makes a lot of sense. Meditation cuts through the distortion. Cuts through the fluff. Cuts through untrue states and falseness.

Seamlessness is what my friend actually meant when she first said the word… but then the more we both looked at it – we decided – wow, it fits both ways and very well for meditative states. A seam is a place where two things come together… two pieces of metal, of cloth, of paper, of photographs, of digital images that one is trying to mesh together seamlessly. I was trying to explain to my friend the feeling of having no disconnection between all things in the world – an underlying connectedness or a feeling that everything is of the same essence… and she came up with the seamless part… and it being a feeling – I added the ness.

A feeling of seamlessness pervades the mind when I experience the interconnectedness of all things – the sort of – “at one with everything” feeling that comes and goes with different levels of strength, but that is pretty much underlying all states of meditation.