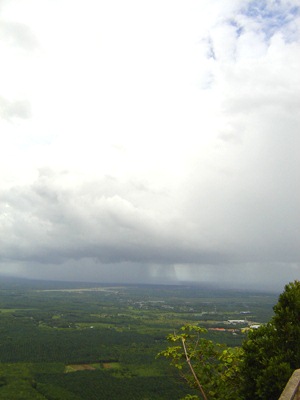 Today began with rain, ended with rain, and as I sit here the next morning – it’s raining. That’s the south of Thailand. It rains more here than Kauai, Hawaii which is saying a lot. At the top of one of Kauai’s mountains it rains more than 300 inches a year. It’s the wettest spot on the face of the earth!

So, apologies for no photos today – and the video I’ve cut out since it would just be the darkness of the backyard. I pulled the audio track and turned it into mp3 so you can hear the frogs croaking a chorus…

I showered in mindfulness, the cold water – which usually I have an aversion to, hit me and was accepted all at once. No aversion came up – though the memory of the aversion did come up. I didn’t feel any emotion toward the cold water – it was just experience as it hit my skin. There was no chill in the body – it just accepted the cold water without emotion. But, the thought – hey, I’m usually averse to this kind of thing did creep into consciousness. It was noted – and I went back to showering. What a great way to get over things not usually ‘liked’.

I did some internet posting – for the Day 1, Intensive Practice blog post you found yesterday. I decided I’d make a specific effort to be mindful of my posture since that must be aggravating my back condition. I try hard to sleep in a way that keeps my spine aligned – but even so, I wake up with pain from it each day lately.

At mid-day I went to one of my favorite hiking spots and walked up the road. It’s an 8km hike (almost 5 miles) and while my ankle was bit sore I thought I’d do it anyway since dull pain tends to go away as I exercise and then afterward there’s only a 50% chance it returns to make it worse. Well, today isn’t worse but I definitely still feel it.

You might get the impression I’m an old man with all these aches and pains… hahah. I’m 42 and I think in reasonably good shape! I’m 5’11” and about 163 lbs. I do some kind of exercise daily – usually a walk up one of the mountains – the stairs or the road with my heavy backpack. I seem to push it though – running up some of the stairs or on the steep inclines of the road – like yesterday. Silly me.

I parked the motorbike and started walking up the hill. I left my backpack at home with my friend and it was nice not to have anything in my hands – but soon I picked up a long stick to ward off ravenous dogs that I might come upon. Dogs are everywhere in Thailand and they don’t always like foreigners. As I walked I balanced the stick in my right hand on one finger (horizontally) and the mind was blank. I maintained that state as long as I could before some thought would come up… I then noted the thought when I realized it – and went back to nothing. Again I maintained that as long as possible – it does take some effort.

Many times thoughts started to germinate… and, once realizing a thought was starting – it stopped. Many little clipped thoughts happened during the walk. A clipped thought is something like this…

I hear my mind voice say something like… “Do you think….” and then I realize it’s going to be a thought, and it stops.

If I’m fast I can see them that quickly. Perhaps it will happen 3 times in 20 seconds and then calm down for some minutes without any thought starting. Sometimes it happens more, sometimes less. There are brief bursts of thoughts that want to come out… to be formed as a whole thought, but, when mindful of it – they stop short of becoming complete, long, drawn out thoughts that lead to full-time thought activity that could take one on a mind journey for minutes at a time before realizing it.

The sooner I recognized the thought and it stopped – the less chance it had of turning into anything at all. If I wasn’t so quick and more of the thought was formed, like, “Do you think there is anyone at the first lookout right now?”

Then – anything could happen. Maybe I keep thinking… “No, probably not – there’s not been anyone else on the whole road so far – and it is raining everywhere – probably there won’t be anyone up there. If there is you can go to the 2nd viewpoint…”

So – the walk was 2 hours, up and down. It rained a little bit and overall the 2 hours was spent in more mindfulness than yesterday’s trip up the steps with all the tourists and visitors to the temple.

The rest of the day was peppered with brief periods of mindfulness – but maybe I need to get a simple watch that beeps every 10 minutes like I had so long ago. It’s a great mindfulness bell.

I sat for 20 minutes in the evening and found the pain in my back to be very strong. I was anxious about – thinking about the pain and didn’t find a comfortable position. The mind could remain still much of the time – but sitting just wasn’t a good idea at that time so I stopped, went outside and listened to the frogs…

Short Dream: I’m in the Way