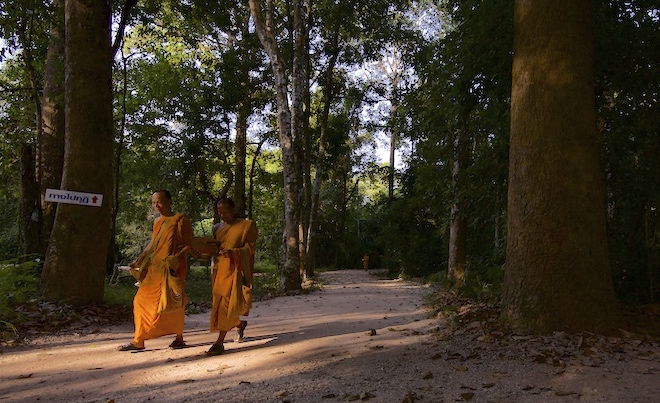 What is Suan Mokkh Temple Like for Meditation on Your Own?

I wandered around Suan Mokkh again today. My family was shopping at the Central World mall in Surat Thani, and I felt like driving up to Chaiya. I had my camera gear with me, so it was a good day to go. Sometimes I go just to do walking meditation.

Sometimes I go to Suan Mokkh to explore it and see what has changed on the grounds. Other times I go mainly to see about shooting some photos and video. Today was mostly about photos, but I did get a few videos too.

I get a very good feeling when walking around here. The first time I visited was in 2005. I had spoken on the phone with a monk that stayed there for 13 years, and then when the abbot died he returned to the USA and was a monk for another four years before finally disrobing. I’m speaking of Santikaro.

As I walk the paths and hear the roosters and hens, the amazing bird calls, I feel like I’m home. This happens in two other temples as well – both in the Isaan region (northeast) – Wat Pah Nanachat, and Wat Nong Pah Pong. These are both Ajahn Chah temples.

Wat Pah Nanachat is filled with foreigners and has a foreign monk as abbot. I think it’s Ajahn Kevali at the moment.

Wat Nong Pah Pong has a Thai abbot, though I don’t know who is performing those duties today.

All three temples were created around the forest tradition. There are many trees and much of the grounds are left as they naturally would be. Maybe because Suan Mokkh caters to Thais only, it has a more traditional feel. There aren’t any overdone meditation halls. There aren’t any fantastically modern buildings like Wat Pah Nanachat has.

Wat Pah Nanachat has a fake aspect about it that I don’t like as much. Wat Nong and Suan Mokkh are less gaudy, less well-manicured, maybe have less paved paths, less went into creating amazing looking structures. I don’t know, it’s a feeling. That said, I still love to visit all three of the places.

I arrived before 7 am. I advise you to as well if you’re planning a visit. The light is beautiful up until around 9 am. The mosquitoes during the dry season that we’re still in, were not so out of control. I walked around and shot some video and photos and then went back outside the gate to get some pad cee-yu, it’s a thick noodle dish with moo (pork) and the noodles are sweet and peppery. I added some prik nam pla and it was quite filling at 10 am.

I walked back inside the Wat Suan Mokkh temple grounds and found myself at the building where the being is handing out eyeballs. This is painted on the wall outside. Inside are some great paintings, I’ll add some to this post. I have taken photos of 95% of the paintings inside. I need to create a website of that.

After that I walked outside, the sun was blazing. It was around noon and it is usually at this time that I?am close to the little library in the bottom of the large boat building. I was happy to see it was open, so I removed my shoes and stepped inside. It was the neatest I had ever seen it. That was a surprise. See image.

I love to look through the books and pamphlets that are stored here. There are some amazingly obscure pieces that are fun to look through. Today I found something exceptional by a monk that is part of a group of temples in Surat, Nakhon, and Chaiya.

I didn’t take down the name or take photos of the pamphlet. It was a Thai monk apparently, but this pamphlet was in perfect English. It was very well edited – perfect really.

The monk was talking about Samatha and vipassana. Vipassana as insight and Samatha as Jhana and other states of concentration. I enjoyed reading it as I sat on the concrete bench which supported my lower back. As I sat in meditation position holding the pamphlet, it was a lot like meditation.

The eyes closed and the flat mind came instantly and without fanfare. There were very few sounds this day. Odd because in Thailand at a busy temple there are always sounds going on – people doing something, dogs barking.

There were some roosters and hens, some birds. It was nice just sitting. Before I knew it I’d sat 40 minutes. I opened my eyes and read some more, contemplating asking the Buddhist nun at the desk if I could take it with me and return it in three weeks when I come back. I decided I’d just find it again on the next trip back.

Endless Churning of the Mind

As I walked around the temple grounds then I noticed something about the big camera I was holding – it’s a big one – a large DSLR and big lens. The contraption weighs nearly five pounds. I thought it was silly how humans must use this very complex machine worth thousands of dollars to just capture a tiny moment in time that isn’t really captured well at all.

Does a picture speak a thousand words? I don’t know. I think if I spoke 1,000 words it would mean more than any image I took. I prefer to create things in my mind about what I hear… with a photo, it’s kind of there for you to embellish on. Doesn’t work so well. I love to read books where my imagination can really build it all up in my mind too. Maybe you’re like that?

I thought about what is actually created in the heavy machine. It’s something that weighs nothing. It’s zeros and ones, bytes and bits. There isn’t anything tangible to what the camera creates. That’s funny. We spend so much on this very tangible machine that can create something intangible for us to view on the computer or another screen.

Then I thought about what we do when we’re not shooting photos. Our mind, this brilliant (?) machine in our heads remembers details about scenes we think are important. I still remember when the mother of my son drove off with him for the last time. I still remember when my first wife left in a cab in New York City and was waving out the back window with so much urgency. Little did I know that I’d never see her again. But apparently, she knew.

Our minds are constantly, unendingly creating these intangible images of places and people, memories of sounds, the feeling we had when we were with someone that meant a lot to us. The mind is not so good at what it does, but it’s all we have. So, we take what we can get.

Some of the memories in our heads are terribly important to us. Some we would kill for. Meaning, if someone said they were going to take the memories out of your head of your child as he or she, or they grew up, you might be so enraged you would kill to keep them.

Funny that, right? As incomplete, as intangible, as outright wrong as many of our memories are – we might kill for them they mean so much. Some of our memories mean the world to us – don’t they?

And that’s all part of the problem.

We hold onto memories, to feelings, to ‘facts’ in our heads. We hold onto beliefs. We like to believe in something good. We like to know that we are aware of what is bad. We use intangibles floating around in our grey matter to make the major decisions of our lives.

So I thought about that as I walked. It was a nice walk… and yet I realized again there wasn’t any of the amazing feelings about the place based on what I was seeing. The many green hues on trees and plant of every sort, were not anything special. The eyes looked at them, the mind was there with them, and yet there wasn’t any grasping to hold onto a scene as it was passed through.

If I think back now at what was amazing about the day, there really was no amazing except spontaneously meditating there on the bench in the library. It’s really probably the most ideal place on the entire temple grounds. There is even a fan there beside you as you sit, in case it becomes too hot. It does get quite hot in summer! We’re almost there, another month and the temperatures will start hitting 38-40C, and higher. That’s over 100F, and extremely humid.

As I try to think if anything else stands out, I can’t pinpoint anything. I remember the rooster that jumped up onto a branch, and then a higher branch as I reached for my camera.

I remember a dog barking as I got near one of the remote meditation halls. That dog is usually there for some reason. The foreign monk from Poland that stayed there previously has gone to Koh Phangan, but this dog is still here for the next owner of the kuti (kootee, hut) nearby.

I remember monks chanting before they ate their breakfast.

I remember the monk from Nakhon Si Thammarat that asked if I had been a monk before. I recently shaved my head with the #1 clipper attachment, and it’s about 1/16th of an inch short. I prefer it in the heat. I prefer it most times. Hair brings with it too much.

I remember finding a jumpy little fly on the ground at my feet before I sat down in the library. It could have flown away, but instead it just jumped around there by my feet, so I took a photo.

The nun (magee) saw me taking the photo and brought over another beetle she’d just collected in her dustpan as she swept the place. I remember looking at the image on the screen after I shot the photo and realizing how inadequate that three thousand dollar piece of electronics was to capture the simple essence and subtle colors and reflections of that little beetle.

So anyway, that was my day. Six years ago or so, I would have said this was such an amazing day. It was so peaceful, so nice to be able to walk around for six hours on my own and shoot photos, read pamphlets by monks, and sit in a quiet place with cool wind blowing through the window behind me.

Today I see it as neither good nor bad, just a way to spend time. Just a way to see a little bit how the mind works and how other people live life.

If you’re in Thailand, why not skip a day of shopping and visit Wat Suan Mokkh in Chaiya? It is south of Hua Hin… south of Bangkok… North of Surat Thani town along the main highway maybe 50 km.