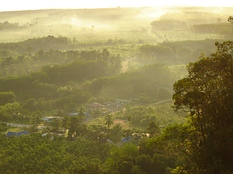 Note – This is an old journal article I wrote in 1998 or so. I don’t have the date written down on the journal entry.

Sitting in the blue room at home. Meditated for a half hour. The back hurts again today. One needs to meditate consistently in order to build up the back muscle tolerance.

One felt relaxed today. Inclined towards sleep. One did reach state of good concentration – yet the back and the outside noises kept one here. At one point while listening to some noise outside the house one realized that we are the noise. In this case it was an airplane. I was the airplane during that state of mind. It never came to one as such before today.

One could never understand logically how this could be yet one has read of the concept so much. As one sat, the knowledge that one is the same as the noise attenuated to was truthful and unquestioned. An instant knowing as if it had been there all along. An unquestioned knowing – yet in the logical waking state EVERYTHING is questioned by this one. In this state there was no need for questions – it just was. It was no less true because the questioning process had been left out. Rather it was more true and more believable.

The mind then sought to logically explain what had occurred. This mind thought that one felt like he was one with the plane because the sound of the plane was nothing more than his own eardrums and body parts making the sound. Every sound that we hear is merely our own eardrum vibrating because the air has been moved (we suppose) by some object producing its own noise or rhythm.

There is nothing we hear that doesn’t go thru the air that surrounds us. If there is no air, there is no sound – and hence, no “I”. Seriously, if we could take this a step further and say that in a vacuum there is no sound, and therefore there is no “I” as far as the sense of sound goes. If we could also find a place in which there was no smell then we could end the “I” state from that perspective as well. If then we shut out all of the light so that our eyes could not register anything around us that is separate from the “I” then we could stop vision as a justifier of the “I”.

If then, we were to immerse the self in a liquid that would counteract our body weight. We could float naked with no movement whatsoever and no sense of touch to separate us from that which surrounds us. The sense of taste would be negated by the lack of any smells. Perhaps some care would be taken to lessen the chance of some flatulence coming from the stomach. In this state, could we say that we exist or that there is an “I”???

We could go to these great pains to induce this sort of state, or, we could meditate and reach it effortlessly–really without trying.

One has noticed that often times throughout the day one will be in moments of awareness of the present moment. It happened today while painting the kitchen ceiling with texture paint. It was like a zen or meditative experience.

The moment was enjoyed, no matter what it consisted of. There was no thought about what was going on, just experience through the eyes, sense of touch, smell – whatever – and it wasn’t judged or changed by the mind.

It happened at the Indian Restaurant yesterday. One ate the entire meal in awareness. It was truly the most gratifying meal one has ever eaten!!