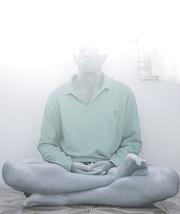 Meditating on the spa in the garage today in the morning 7:30. There was an instant calmness and emptiness that existed. The mind was not much troubled by anything, nor was it following anything that the eyes saw. It was a nice 20 minutes.

At another time as the eyes focused on the reflection of the garage light on the nose (a very small dot on the tip of the nose), one saw that the features of the face were a bit disjointed.

One remembers thinking that everything we see is just a perspective of the world as it is. It is just a fractal vision of the complete surroundings that envelope us everyday. 3D, 2D, are all partial views of this world. There is no seeing through these eyes as things truly are from a world perspective.

Note – this is a fascinating experience that I hope some of you get to try it. Not many of you will have mirrors right in front of you as you sit to meditate, but it is worth buying one to try it. It’s rather dumbfounding to sit and watch your head and body disappear. Mirror meditation is a great exercise for ‘letting go’ of fear and anxiety because if you can sit there and watch your head disappear, and not be fearful – it’s quite something.

1 thought on “Mirror Meditation | Looking at Self While Meditating”