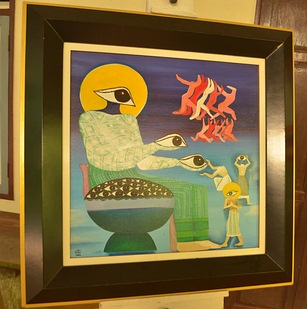 Yesterday I lay on the floor in my room after having done some exercise outside. It’s hot here in Thailand, some days hover close to 40 degrees Celcius. I think that’s 97 degrees F. Not sure exactly, but it’s warm, I know that!

I tried about 10 minutes – repeatedly trying and trying. It just wasn’t going to happen.

Instead, I then focused on just relaxing the body and not thinking anything – letting thought stop, mind stop.

A numbness came – the limbs first and then the body was absent. Just felt like there was no body. I was aware of sounds, but nothing of body. Mind was still.

In that state, I drifted off to sleep for a few minutes. I had a short dream. It was very short. Saying it was 5 seconds – is probably exaggerating. It might have been 2 seconds.

The dream was very short – one scene. It was of two hands holding a head that was glowing – though already I forget what colors – I believe orange – but, no matter I think. It was glowing as if on fire… as if a magic fire inside the head. The head was neither man nor woman… it was just a head. It was being handed down by two hands – one on either side of the head. And it was set into my head. It was absorbed into my head.

The feeling as it came into my head was one of thanks – of gratitude that something – someone – something – offered me this gift… whatever it was. There was no idea about what it was – though now, awake – I could think of some. No point really. It was a very unique dream and lasted just seconds. I awoke and remembered it for a few minutes. My head was light. My mind replaying the scene and searching for the feeling inside.

The feeling was just ‘thanks’.

So, that was my strange dream. Today is my 42nd birthday. I’ll sit here in a few minutes, I’m in that thoughtless state…

Comments on No Thought State of Yesterday 8-31-07