I was lucky when I began meditating. I didn’t have any illusion about what states I might reach, what levels. I didn’t study any of that, because I just couldn’t have cared less at the time I started meditation.

To me, meditation was just an attempt at relaxation for twenty to thirty minutes. Immediately I began to experience the benefits of sitting still and focusing on the breath.

My normally running rampant mind – complete with Attention Deficit Disorder – began to slow down a little bit in the first couple of weeks. To be honest, it slowed down very little for the first month or so. Then, little by little, meditation began to have an amazing effect on my mind.

Thoughts began to pop up in less frequency than they had when I first began meditating. This was my first real taste of the mental relaxation that could result from a meditation practice. It was fantastic because once it started, it continued to operate on my fragmented mind, slowing it down even more over the next few months.

It was a few months from the time I started to when the mind first began stopping altogether. I mean, thoughts stopped. They just didn’t pop up at all for some stretch of time… seconds at first, then minutes and tens of minutes.

So, this initial benefit of meditation was actually two-fold.

1. My body relaxed. It felt better than sleeping during meditation because I was aware of how at peace the body was sitting silently without movement, stress, something to ‘do’. It was a great form of relaxation, and if this was all I ever got from meditating, it would have been enough. This was, after all, just what I was in search of when I first sat down to see what meditation was all about.

2. My mind relaxed. As I said, the mind began slowing the number of thoughts down that popped up while meditating, and slowed down to the point of stopping. This was unexpected, but really quite a bit more amazing than just having a relaxed physical body. I’d never experienced a relaxed mind before. I was exploring new ground, and that was exciting.

The next benefits, the awesome states of mind that followed the mind stopping, were all a surprise to me. I wasn’t looking for them. I didn’t know what they were when they came. When I first had the idea to meditate, I read some Buddhist books on it, and I found them to be filled with what I thought must be superstitions, and magical thinking. To me Buddhism was just another -ism that I didn’t care about learning. In the past I was a Catholic, then a Christian. Around age 22 I finally stopped reading the bible and had a World Religion class in college. I began then to question all religions and beliefs of every sort. One that you might not know about me, is that I questioned national-ism quite a bit. I found it to be just like many religions, and tossed it aside with the rest.

So, the idea of Buddhist meditation didn’t appeal to me much. After reading a couple of meditation books and eastern religion books, it looked to me like meditation could also just be a physical exercise. Well, physical and mental. I could sit and relax and watch my breathing, focus on it with my mind, and gain some sort of physical relaxation from it. What I could gain mentally, I didn’t have any idea about. As I said, it was like a bonus when I began to have some mental peace from it as well.

So, the mind had begun to stop during some of my meditation sessions while focusing on the breath. When it stopped, various things resulted. Experiences came and went. At times I would focus on the breath more, to make that focus laser sharp. Other times I would sit in the stillness of the no-thought state and just observe… without there being a separate observer. Hard to explain if you’ve not experienced it. It was as if being alive for the first time, without thought interrupting and changing the experience.

Soon various experiences came. Some were mellow. Some were filled with energy, emotion, and even weirdness. The mind is so extremely powerful that it can produce shocking experiences that change your life. Eventually, Jhana started and that was really a life-changing time period of my life. It revolutionized my entire being. It was incredibly powerful, not just the states themselves, but what happened after the meditation when the states had dissipated. There was this vibrant state of mind that was clear and free. Really something to experience.

The point of this article was to tell you about the Catch-22 situations in meditation and progress into the thoughtless and Jhana states.

I think most people don’t have a very simple goal in mind of just meditating to relax the body to start. So, I’m different that way. I’m also different because I didn’t know what mind states existed for relaxation, and didn’t really care. I was sure that studying them would be pointless because I didn’t think my mind would ever slow down enough to allow progress in that area. Attention Deficit Disorder is really an all-encompassing problem that affects the mind during all waking hours. I enjoyed about an hour of slower mind processes in the early morning if I woke up around 5:00 a.m., but otherwise my mind was fully engaged and chugging out the thought streams 100%.

The Catch-22 with meditation is that, in order to progress to the point where the mind stops and Jhanas and other experiences are possible, you must let go of any desire for it to happen.

Teachers of all sorts and I’ve seen a lot of videos and read a lot of books by this point, seem to go about telling students of meditation how to go about it in ways that I don’t think help them come to any real understanding of how to go from here to THERE. ‘There’ being the goal.

The Catch-22 is that the more you listen to these teachers, the less you are going to be able to experience similar things. The possibility for nibbana – the freeing of the mind from all suffering, gets further and further away as you make it more and more important in your mind. So, the problem is that building up the importance of attaining nibbana, nirvana, enlightenment, moksha, whatever you want to call it, hinders your ability to do just that.

The classic way to show you the Catch-22 is to point you to this video of Bruce Lee in one of his old films. I don’t know that Bruce Lee was enlightened, or not, but it’s a really great example to show you what’s happening with the teacher trying to show the student how to get ‘there’.

Bruce Lee and the Classic Catch-22 >

Starting after the 1 minute mark, Bruce Lee tells the student, “It is like a finger pointing a way to the moon…”

Bruce smacks his head. “Don’t concentrate on the finger or you will miss all the heavenly glory.”

So, Bruce is showing him that the way, the instructions that he is giving are only pointing the way to the truth. They are not the truth themselves. The finger is not where to concentrate but beyond that. The finger is like a tool to lead the student to realize the truth on his own. Focusing on the finger will lead to nothing. The realization must come from inside.

So, every student that follows a teacher, a method, some rules, some path to get to enlightenment, to reach Jhana or some other experience, will experience this Catch-22.

Every teacher goes about trying to help students reach ‘there’ but I think so very few people get it at all.

I’m going to try to show you what it is all about here.

If you WANT to reach a state of mind like the Buddha, like some of these teachers who have experienced ‘higher’ states of mind, you cannot get there. In order to get ‘there’ you must give up the wanting for it. The Catch-22 is that when you want it – it cannot come. It’s like – the more important you make this goal, the less chance that you will ever see it.

I look at the monks here in Thailand that have tried for forty and more years to reach even the first few Jhanas, and they continually fail during meditation to have those experiences.

They have made the goal of reaching Jhana – of stopping the mind – SO IMPORTANT that it gets in the way. It prevents the person from getting into these states.

In some sense, he is correct. However, I approach it a different way.

During meditation, we need to be able to give up the wanting for a brief time. The focus needs to be on something else, so the mind can stop, and then we can move forward by giving up everything that arises after that. In the thoughtless state there can not be any wanting. There cannot be any desire to go ‘get’ some experience. The absolute ONLY way to have anything more occur is to keep the mind empty of thought, of desire, of will, of ego, and then naturally, the experiences come. As each experience comes and is experienced, one then lets go of it and the next experience comes. And so on. 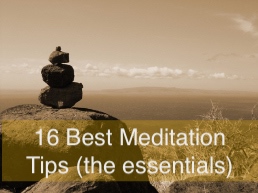