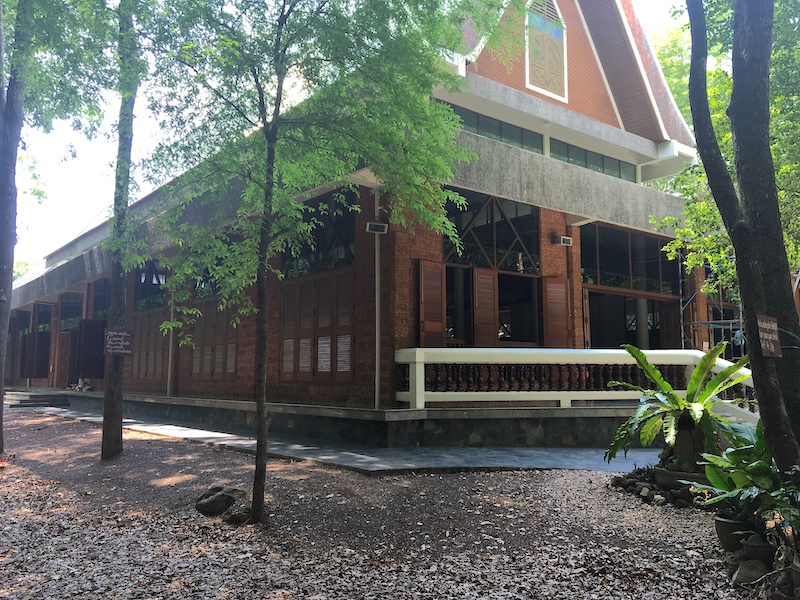 Located 12 km southeast of Ubon Ratchathani or 10 km southeast of Warin.  See Wat Pah Nana directions above for transport to Ubon. From Ubon, you can take a pink bus to its terminus in Ban Gor, then walk or take a tuk-tuk 2 km west to the monastery.

You can walk to Wat Nong Pah Pong from Wat Pah Nana in 1.5 hours on a series of dirt roads, footpaths, and roads. Just ask to see the map at Wat Pah Nanachat. Be aware that dogs are a problem for foreigners in Thailand. You probably should take a songtaew or motorbike taxi.

Similar to Wat Pah Nanachat, except that women have very little contact with monks.

Instruction is given in Thai; the teacher doesn’t speak English. Sometimes western or Thai monks can translate.

Forest and open areas total 350 rai (140 acres). Originally this was a cremation site thought to be inhabited by ghosts. Much construction work has taken place in recent years. Arriving from the east you’ll first see a 3-story museum.

Exhibits inside include a life-like statue of Ajahn Chah, his robes and other memorabilia, archaeological finds, Buddhist art, and area crafts; bas-reliefs illustrate important events of Ajahn Chah’s life, including his visits to England; skeletons on display can be used as meditation objects.

Continuing into the monastery, you’ll arrive at a new sala, an ornate concrete bell tower (monks cast the bell), Ajahn Chah’s old kuti (monk hut) where he used to sit downstairs in a chair to meet with visitors, and a bot (main building) of modern architecture. A circular mound to the north is used as a meditation area; a chedi on top contains Ajahn Chah’s ashes.

This is one of my (Vern’s) favorite temples in Thailand for meditation or just visiting to enjoy the peace of the space. This is a quiet forest temple that has a special place in the hearts of Thais across the country and world.

My wife’s aunt visits here many times during the month to help with feeding monks and the community.

Similar to Wat Pah Nanachat. This is also a good place to combine one’s own practice with group activities in a monastic environment.

Adequate northeastern fare with sticky rice; one meal a day and an afternoon drink.

Monks, novices, and laymen stay in well-separated kutis; most have no water or electricity. Laywomen stay with nuns in a separate area of the monastery; laywomen must speak Thai. Women will find better conditions at Wat Pah Nanachat. Most bathing is done in shower blocks; toilets are Asian- and western-style.

One should speak Thai or be willing to learn. Long- term laymen shave their heads and eyebrows and wear white. Much of the western Theravadan Sangha originated here with the encouragement and support of Ajahn Chah.

In Thailand, Ajahn Chah earned fame by his skill at training monks in high standards of Dhamma-Vinaya.  He was one of the most influential monks of Thai Buddhism. Born in nearby Ban Gor in 1918, Ajahn Chah took robes as a novice at age 13. He ordained as a bhikkhu (novice monk) when he was 21. In 1946, following his 8th Rains Retreat, he set out as a Phra Tudong, wandering the forests and practicing meditation in lonely places.

Teachings of Ajahn Mun and Ajahn Ginaree influenced him during this period. In 1954, Ajahn Chah accepted an invitation by his mother and villagers to return to Ban Gor to establish a new monastery — Wat Nong Pah Pong.

After many years of teaching, his health began to deteriorate, resulting in an operation to relieve cranial fluid pressure in Nov. 1981. Unfortunately, his condition worsened in mid-1982. By the end of the year, Ajahn Chah had become bedridden and unable to teach.

His monks continued to lovingly care for him. Ajahn Chah died here on January 16, 1992 at age 75. His life and teachings inspired a great many people around the world. At his funeral, which took place exactly one year later, the king and thousands of monks, nuns, and laypeople gathered to pay their respects.

Please visit other links such as: