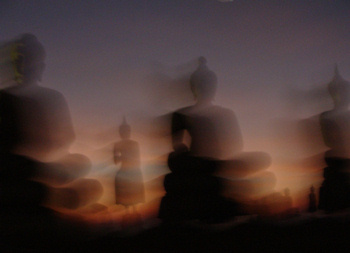 UG Krishnamurti meditated and questioned his state until he came to a place he called “the calamity.” This was a revolution inside his body and mind that destroyed the old and replaced them with new ways of looking at things, of thinking, of being.

Years ago I found UG Krishnamurti’s books alongside Jiddu Krishnamurti’s books at the bookstore. I started reading and was immediately fascinated. UG came to a place in his mind without Buddhism, though it was influenced by Buddhism, he basically got there without consciously playing the role of a follower of Buddha. He sort of stumbled into it.

I just found this amazing video by Ian McNay of UG that I hadn’t seen before. The sound quality is atrocious, but, with earplugs plugged into my computer I can hear it OK.

I’ll put the video below.

My experience has been very similar to UG’s, and yet different in some ways. I understand everything he is saying when he talks about his experience and the state of his mind… I’ve been there, I am there. It’s interesting that he says “you don’t know what hit you.”

When describing what happens when the questions about enlightenment hit. You have no way of knowing or explaining what it is… and yet there is a change. Then a new equilibrium settles and you go on…

I wonder if I’m in that new equilibrium settling down point now, or if I still need to spend time in the silence. I am definitely at a point where I cannot describe what is left of ‘me’ and what it means, if anything. It is not a bad state, a harmful state, an unhealthy state… but it is certainly an odd state that is neither on this side of the fence, or that. It is as if I have been teetering on the top of a very thin branch – almost going off into the unknown.

Anyway, this video was fascinating – and there are more parts to the interview I’ll have a listen at now –

Someone at a UG Krishnamurti FB Group posted this bit by UG. This is what I was talking about two nights ago with a friend here in Thailand. He was wondering if I might be enlightened, or what enlightenment is. His definition was very similar to this by UG.

I am not out to liberate anybody. You have to liberate yourself, and you are unable to do that.

What I have to say will not do it. I am only interested in describing this state, in clearing away the occultation and mystification in which those people in the ‘holy business have shrouded the whole thing.

Maybe I can convince you not to waste a lot of time and energy, looking for a state which does not exist except in your imagination. There is nobody here talking, giving advice, feeling pain, or experiencing anything at all. Like a ball thrown against the wall, it bounces back, that is all.

My talking is the direct result of your question, I have nothing here of my own, no obvious or hidden agenda, no product to sell, no axe to grind, nothing to prove. That silence burns everything here. All experiences are burnt.

That is why talking to people doesn’t exhaust me. It is energy to me. That is why I can talk for the whole day without showing any fatigue. Talking with so many people over the years has had no impact upon me. All that they or I have said is burnt here, leaving no trace.

This is not, unfortunately, the case with you. The personality does not change when you come into this state. You are, after all, a computer machine, which reacts as it has been programmed. It is in fact your present effort to change yourself that is taking you away from yourself and keeping you from functioning in the natural way.

The personality will remain the same. Don’t expect such a man to become free from anger or idiosyncrasies. Don’t expect some kind of spiritual humility.

Such a man may be the most arrogant person you have ever met, because he is touching life at a unique place where no man has touched before. It is for this reason that each person who comes into this state expresses it in a unique way, in terms relevant to his time. It is also for this reason that if two or more people are living in this state at the same time, they will never get together.

They won’t dance in the streets hand in hand: We are all self-realized men! We belong!

That individual will certainly have an impact on human consciousness, because when something happens in this consciousness of man it affects (the whole), to a very microscopic extent maybe.

So, this is a simile: when you throw a stone in a pool, it sets in motion circular waves. In exactly the same way, it is very slow, very slow it is something which cannot be measured with anything. So, maybe that’s the only hope that man has that’s the first time such an individual becomes a man otherwise he’s an animal.

And he has remained an animal because of the heritage, because the heritage has made it possible, from the point of view of Nature, for the unfit to remain; otherwise Nature would have rejected them a long time ago.

That’s my argument. You may not agree. It doesn’t matter.